Directing a Reading of Your Play

Created by Marshall Mason; Edited by Dawson Moore and further edited and amended by Erma Duricko 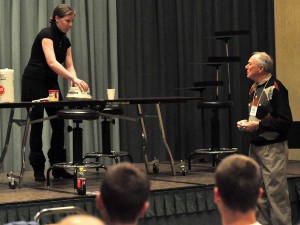 The following material was written by Marshall W. Mason to give advice to playwrights who would be directing their readings in the Lab. There are great tips in here for anyone directing a reading, regardless of the venue.

At the Last Frontier Theater Conference, you will be participating in the Play Lab, where you will hear actors read your play aloud in front of an audience. After the reading, a panel of respondents will tell you how they were affected by your play, and offer constructive criticism. Then you will have a private one-on-one conversation with one of these panelists which can take whatever form the two of you agree on.

You can contribute to the success of this process by applying the following suggestions on how to make your reading as representative of your script as possible.

Rehearsal and Speaking with Your Actors:

Stage the reading: At the Conference, chairs, stools, and music stands are available in each room.

Set up the Stage: Usually at the Conference, you will not need to monitor some of the following concerns, but in another situation, you may. Here, it should be enough to check the levels of the sound system, the direction of the microphones, and that the outside doors are shut (both to the hallway and backstage). It is important, though, that the actors do a vocal level check in the room to make sure you can hear them from the back.

Music:  If your play requires or would be significantly enhanced by using music at the reading, record the cues on a CD if possible. Be sure to check the CD player before the reading to ascertain whether it has power and pre-set the desired volume.

1.  If the reader of the stage directions is to operate the CD player, make sure he or she knows exactly which button to push to start, stop and/or pause the machine. A piece of tape on the play/pause button is useful.

2.  DO NOT plan to operate the machine yourself: your concentration needs to be free to listen to the play and the audience response.

Introducing the reading: At the Conference, the actors will mostly already be in place as the audience is coming in. Your reading will be assigned a panel of respondents who will take charge of starting the reading. BUT, you might wish to have the actors enter as group, with the reader of stage directions entering last. He or she should introduce himself (or herself) and then ask each actor to introduce himself (or herself) and the characters they are reading. The Reader should then announce the title of the play, the time and setting and read the opening stage direction.

Talking with the Actors